Previous Next
The Spotted Pig is New York’s first gastropub, opened in February of 2004, runned by April Bloomfield and her business partner, Ken Friedman. In 2005 the first-ever Michelin Guide to New York awarded the Spotted Pig one star.

One burger is house specialty, which the restaurant’s chef, April Bloomfield, serves one way: char-grilled, on a brioche bun, topped with crumbled Roquefort. Only Lou Reed, a fixture in the neighborhood, is allowed to have his burger with onions (because a server mistakenly heeded his request when Bloomfield wasn’t there). Mayonnaise is forbidden. 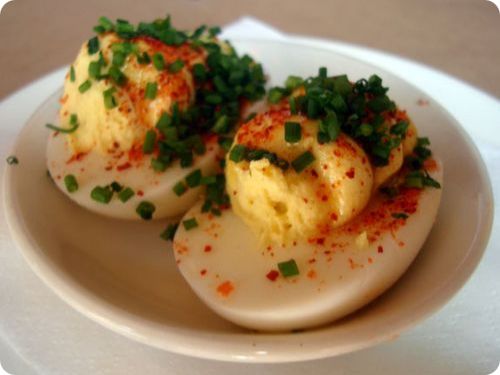 what about deviled eggs ? That paprika-sprinkled, mayo-laden staple of family picnics. It’s immediately obvious that these aren’t your standard deviled eggs: perfectly shaped whites, overstuffed with piped golden-yellow filling to the point of ridiculousness. A drizzle of bright olive oil pools around them, and on top they’re loaded with sliced chives and red-pepper flakes, and a definite hit of mustard.