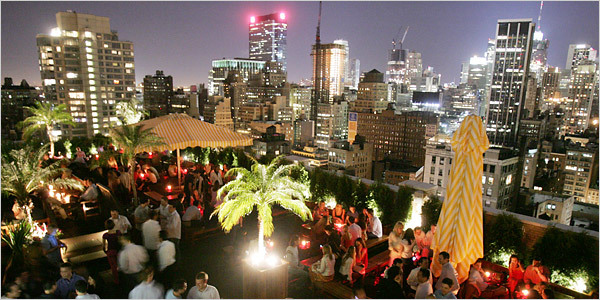 1 Oak
[453 W. 17th St. (bet. 9th & 10th Aves.), Chelsea ]
1 OAK caters to a high-end clientele, so it should come as no surprise that its doors are one of the toughest to saunter through. Though you’ll likely have to know someone to get in, take your shot by coming early and chatting up the door staff, who usually veer on the friendly side. Once inside, you’ll see what all the hype is about as you rub elbows with anyone from Russell Simmons to Janice Dickinson in a space that, unlike many of its peers, rarely gets unbearably crowded.

PJ Clarks
[915 Third Ave. (55th St.), East 50s]
For 125 years this venerable New York institution with its colorful history has entertained the famous, the infamous and everyone else who appreciate the ambiance and food of a real saloon. The pay phone is still “Out of Order”, the broken cigarette machine remains broken, and the ashes of one of our favorite patrons, still reside behind the bar. Our little terrier faithfully watches “the joint” while P.J.’s famous jukebox plays Frank, Buddy and Sting. The wives’ beer window stands open and anyone can say “So, set ’em, Joe” where Johnny Mercer penned “One for My Baby”. Democracy reigns in the dining room as the newsmaker rubs shoulders with the CEO sitting next to the ironworker. We welcome you for another 120 years (at least) of good food, good drink and great conversation.

McSorley’s
[15 E. Seventh St. (bet. 2nd & 3rd Aves.) , East Village]
McSorley’s is the oldest Irish tavern in New York City. It was one of the last of the “Men Only” pubs, only welcoming women after legally being forced to do so in 1970.

The aged artwork, newspaper articles covering the walls, the sawdust floors, and the Irish waiters and bartenders help give McSorley’s Old Ale House an atmosphere that many consider, correctly or not, reminiscent of “Olde New York.”

Hudson Hotel Library
[356 W. 58th St. (bet. 8th & 9th Aves.), West 50s]
This is a sophisticated bar with wood-heavy room and high ceilings. Though no one is reading, you’ll feel compelled to whisper. Maybe it’s because there isn’t always music, and when there is, it’s played at low decibels, which means everyone can hear about your one-night stand. Or maybe it’s because people seem more interested in checkmates at the chess board than actually checking out a possible mate. The crowd is a mix of hotel guests and professionals and everyone seems like they are waiting for something to happen. If it does, it won’t be here, but rather at the hotel’s main bar, so don’t come if you’re looking for action.

The Zagat surveyors also agreed that the top “newcomers” to the city’s nightlife are the Jane Hotel Lobby Bar.