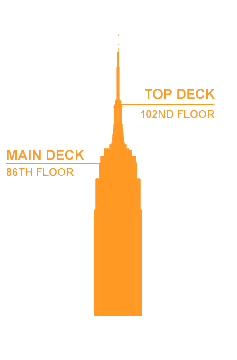 The Empire State Building Observatory is a famous viewing deck located on the 86th floor of the landmark New York City office building.

Visitors can enjoy sweeping vistas of Manhattan and Brooklyn, Queens and New Jersey. Landmarks like the Statue of Liberty, Brooklyn Bridge and Central Park are all visible on clear days from the Empire State Building Observatory, which towers 1,050 feet above the city streets below.

The ride in the elevator up to the 86th Floor Observatory takes less than one minute and The Empire State Building has appeared in more than 250 movies to date.

For an additional fee, visitors can access an observatory on the 102nd floor. This one is smaller and entirely enclosed, with glass windows.

2- Top of the Rock Observation Deck at the Rockefeller Center 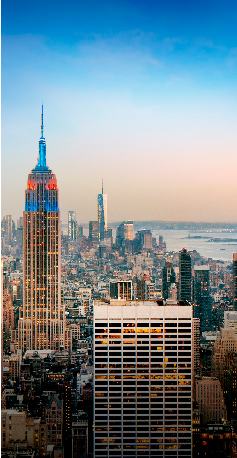 Soar 70 floors high and experience not one but three viewing decks, the exhilarating joy of unobstructed 360º city views. From the sweeping green of Central Park to the thrilling city skyline, nowhere else can you see New York so spectacularly.

Top Of The Rock is most certainly a tourist attraction, but the views are amazing enough to delight even the most jaded New Yorker.

Views include some of the city’s most prominent landmarks from the Chrysler Building to the Brooklyn Bridge and from Central Park to the Hudson and East Rivers. 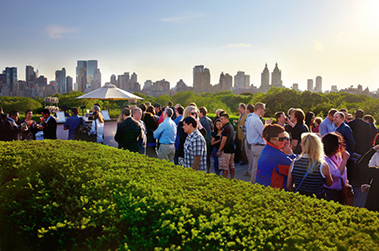 The Met’s rooftop garden cafe and bar offers perhaps the best view of Central Park. It is a gem of this city. What makes this place special isn’t the food or drink but the vibe, particularly on a Friday or Saturday night–an international crowd standing together on top of one of the greatest museums in the world watching the sun set over one of the greatest cities in the world.

The rooftop is also the Metropolitan Museum of Art sculpture garden, with a rotating installation of sculptures. The bar is self-serve and not cheap, but with a panoramic view of the park and city, in such a special space, you simply can’t beat it.

230 Fifth Rooftop Garden
The best views of the city. Huge outdoor patio with lots of beautiful people. The terrace is really nice and well decorated. On a nice day perfect location to get some Sun and see the views. Don’t leave New York without visiting this place!

Ink48 Hotel
On the sixteenth floor of the Ink48 hotel. It’s not the only rooftop bar coming to Hell’s Kitchen — we’re told that in mid-May, a bi-level, 5,000-square-foot “ultra lounge” will open in the 33rd and 34th floors of the new Marriott Fairfield Inn and Suites. It sounds like designers Stephen B. Jacobs and Andi Pepper are going all out on this one — to complement views of the Hudson River and the Empire State Building, a ceiling of LED lights will mimic an aerial view of midtown Manhattan.

5- What about your own rooftop apartment? 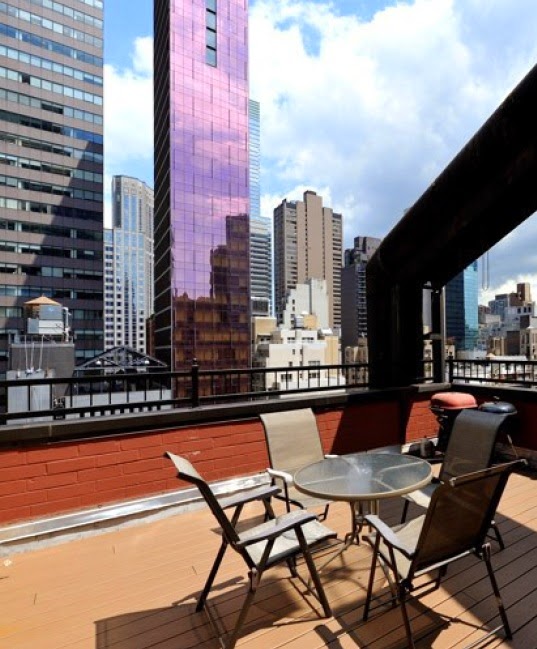 Stay in your very own unique Manhattan apartment with an extraordinary view of the city. You will be living like a true new yorker, enjoying the best views and amazing restaurants.

You can do your own parties with friends and friendly neighboors, saving some money also. Staying in an apartment can give you the sense of living in New York City instead of just visiting.

Almost all of these agencies also offer longer term rentals and corporate rentals. If you want to check out some apartments for rent in New York, we invite you to visit Localnomad, it’s one of the bests.

You will find such gems like the one of the picture.

Apartments are typically much more comfortable than equivalent hotel rooms and, although even if eating out is wonderful in New York, having a kitchen to prepare your own meals and snacks occasionally can be good too.

A studio apartment is a one room unit, also called a bachelor apartment. Sometimes the kitchen is separate from the main room, but not always.